Bienno is a small medieval village, which past and present are linked by an invisible wire that made it possible for our borough to become what it is today:  the blacksmithing.  Already inhabited by Camuni (Camonica Valley residents) in the Prehistoric Era, Bienno became, in 16 BC, a Roman stronghold and acquired its typical perpendicular streets:  it was later conquered by Barbarians, who were defeated by Longobardi.

Blacksmithing has been practiced since the very beginning by Camuni:  the proof lies in the large number of mines that date back to the Prehistoric times located on the mountains surrounding the village.  Around Year 1000 was built the Vaso Re, an overhead canal that brought water to the several mills, sawmills and forges and gave life to the hammers.  The first written record from the 17th century talks about fifteen forges in the village:  in the most productive times, life was lived by the hammer.  The iron industry and its manufactures, which included agricultural tools and guns too, especially when Bienno was under the domain of Venice, granted a flourishing art, culture and economy, features noticeable in the rich churches, manors, remarkable frescoes and countless works of art.

Following the 60s economic crisis many forges have been shut down, but five of them have survived and are still as strong as ever;  the most relevant ones are the „Fucina Ludoteca“ (rec center forge), where kids can learn more about iron working through games.

The Fucina Museo (Museum-Forge), belonging to past eras, guardian of the ancientand mighty hammers, has remained untouched and is still operational.  Archimede’s Principle, put into practice by our smiths, who call this contraption „tina de l’ora“, breathes life into the hammers.  Bienno’s skilled blacksmiths, our „Màihter“, with blackened but smiling faces, will welcome everyone into their fire kingdom and will happily unveil trade secrets to anyone who’s willing to listen.

Since 1988, this particular forge has been home to the „Ethnographic Iron Museum“. The last, but not in the slightest our least relevant forge is the ex Franzoni’s Forge; recently restored, public courses take place in it, alongside exhibitions such as the Iron Biennale, but most importantly, the Scuola-Bottega. This 4 year old project, which involves the collaboration of the CFP Zanardelli (a Professional Formation School), teaches its students the basis of metal working, so that this ancient art won’t be forgotten. The pupils learn how a forge works in all its aspects, from which type of wood is to be used for different functions, to the smiths hierarchy: they read about the young Brahchì, the kid who had to light the fires in a smithy every morning, while they work with Fréar and Màihter, the chief smiths. Welcome, dear reader, in one of the Most Beautiful Italian Boroughs!

Bienno is a quiet little village in the north of Italy, located in the Camonica Valley.  This is known as „Valley of the Signs“ thanks to the rock carvings made by Camuni, dating back to a period of time that goes from the 8th millennium BC to the medieval era:  our Valley was the first Italian site to be added to the Unesco World Heritage List.

But let’s go back to Bienno now:  there are a great deal of places to visit in this Borough, some of them are:

Bienno has been a member of the Iron Ring since 2010 and has proudly hosted the annual Conference in 2013.

Iron Activities
Creative Week with Elementary School kids.
Bienno’s children have spent two days of the week in the forge with our smiths, watching them work and creating little objects themselves, in order to learn the basics of iron smithing.
Bienno x Milan
Goldsmith students from Milan came to Bienno to experience a different kind of smithing: tutored by „CFP Zanardelli“’s kids, they created crosses and iron flowers.
„Bienno’s cowbells throughout history“
The month of June has hosted smiths from Sardinia, who have exchanged techniques with Bienno’s smiths on forging cowbells.
Biennale internazionale di forgiatura al maglio
24 skilled teams from Belgium, England, Czech Republic and all of Italy have challenged each other in this biennial event.
The smiths proved their worth creating ironworks between „fantasy and reality“ during the last weekend of May.
Artisans do it Better!
The title of this Erasmus+ Project says it all: 30 guys coming from 5 different countries explored the Camonica Valley from the 17th to the 24th of July.
They spent a morning in one of our forges with our loyal smiths, Giacomo and Piergiulio, who showed them the basics of forging, explained how a water-based maul works and let them try it themselves.
it’s safe to say they enjoyed their time, as they even invited the smiths to their dinner party!
Mostra Mercato di Bienno 2018
The 28th Edition of our beloved Mostra Mercato , titled „Signs and Stones“ has welcomed both known and new artists to Bienno’s paths, squares and courtyards.
Despite the weather, the streets were crowded with fascinated people who took this chance to discover different arts, taste traditional foods and enjoy various kinds of shows.
The renovated forge called „la Parada“ hosted artists from the two towns of Bienno, part of the „Valley of the Signs“ and Matera,  the „Land of Stones“.
For this occasion, these two UNESCO Sites started a twinning programme that will see its  end next summer  in the city of Matera, that will be the European Capital of Culture of 2019. 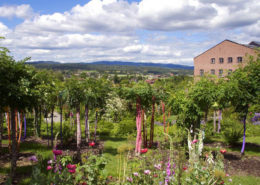 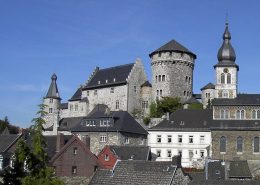 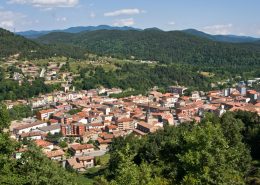 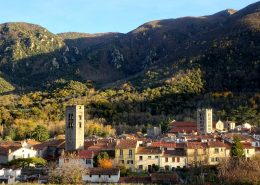